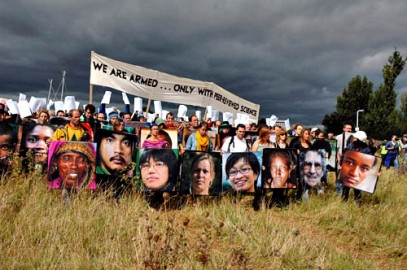 In a new open access paper in the Journal of Environmental Policy & Planning Jason Chilvers and Noel Longhurst set out a new framework that reconceives public and civil society engagement in energy transitions as co-produced, relational and emergent.

The paper speaks to the urgent challenge of transitioning to sustainable low carbon energy systems and debates over how civil society and the public should be involved. A starting point for the paper is the observation that many existing approaches to societal engagement in energy system transitions – whether in social science or in policy-practice – adopt narrow or pre-given notions of who participates (the participating subjects), how they participate (the models of participation), and what they participate in (the objects of participation). It is therefore suggested that existing approaches attend to particular parts of ‘the system’ in a compartmentalised way – for example the relative focus of deliberative processes on feeding back into sites of decision-making, the emphasis of behavior change and social practice-based approaches on domestic settings of everyday life, social movement theory’s focus on sites of situated protest and activism, and so on.

In contrast – through bringing the sustainability transitions literature into conversation with constructivist Science and Technology Studies (STS) perspectives on participation for the first time – the paper develops an alternative conception of the who, how, what and where of energy participation as being actively constructed through the performance of participatory practices. This relational co-productionist understanding forms the basis of a framework for symmetrically comparing diverse and interconnected forms of participation across wider socio-technical systems.

This approach is applied in a comparative analysis of four diverse cases of civil society involvement in UK low carbon energy transitions: a government-led deliberative consultation; a climate camp protest; a smart energy technology trial linked to domestic energy behaviors; and a grassroots innovation in the form of a solar community energy initiative. While significant differences are evident in how each collective of participation produces particular visions of energy transitions and models of engagement and ‘the public’, it is striking that all four exhibit similarities in how they are partially framed, subject to exclusions, and are powerfully orchestrated.

The paper concludes with some reflections on the value of this approach for opening up the politics of societal engagement in transitions, building systemic perspectives of interconnected ‘ecologies of participation’, and better accounting for the emergence, uncertainties, and indeterminacies of all forms of participation in energy transitions.

The framework developed in the paper forms part of a wider body of work in the 3S Group to develop new relational co-productionist approaches to participation and democratic engagement – including the recently published Remaking Participation book – and is being taken forward in our current UKERC project on rethinking energy participation as systemic and relational.

The paper is an output of the Realising Transitions Pathyways project, an Engineering and Physical Science Research Council (EPSRC) funded consortium of nine universities which have collaborated to develop interdisciplinary ‘transition pathways’ that explore possible futures for the UK electricity system up to 2050. A key role for the 3S team has been to balance the engineering and economic dimensions of analysis with a recognition of the significance of the social dimensions of energy system change, including how the interactions of different actors might be understood.

Transitions research recognizes that current environmental problems represent formidable societal challenges, whose solution requires deep structural changes in key areas of human activity, but that existing systems tend to be very difficult to ‘dislodge’ because they are stabilized by various lock-in processes that lead to path dependent developments and ‘entrapment’. In recent years, research at UEA has been developing tools for the assessment of sustainability transitions, developing theory, and conducting empirical research on ‘grassroots’ innovations (in a range of empirical domains including housing, food, complementary currencies, community energy projects, and transport). The current focus of research is on the role of culture, civil society and social movements in transition processes.

The rise of public participation in science and the environment in all its forms – ranging from institutionalised invited spaces of engagement to those that are uninvited and citizen-led – has the potential to empower citizens, enhance social justice and the quality of decisions, but also to close down, disempower and exclude. Research under this theme involves the study of democratic experiments and innovations in participatory governance. These are reconfiguring relationships between science, policy and society and coproducing knowledges, appraisals and commitments in response to sustainability challenges.