Remaking Participation, a book edited by 3S Chair Jason Chilvers and Matthew Kearnes (UNSW, Sydney), has received the European Association for the Study of Science and Technology (EASST) 2018 Amsterdamska Award.

The award, in honour of science and technology studies (STS) scholar Olga Amsterdamska, is made for a “significant creative collaboration in an edited book or special issue in the broad field of science and technology studies.” It recognises a “substantive contribution” to the STS field in terms of “originality or impact” and “the quality of the editing”.

On receiving the book award Jason Chilvers said: “At a time when democracy and expertise are said to be in crisis, we brought together leading thinkers writing on these topics to create an ambitious agenda for remaking how we think about and practice societal engagement with science and environmental issues. We are delighted that these new approaches to thinking about democracy and participation in the field of science and technology studies and wider practice have been recognised in this way.”

The Amsterdamska Award, one of three book prizes awarded by EASST during its biennial conference at Lancaster University on 26thJuly 2018, places an emphasis on meaningful collaborations. Reflecting on this Jason added: “As we are pressured into ever more competitive and isolated relations in academia and the wider world, fighting for the importance of collective action, collaboration and building solidarities is more important than ever. This makes the Amsterdamska Award special and we are so proud to be associated with it.” 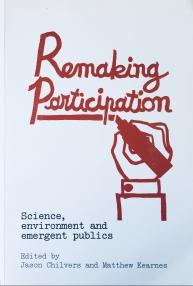 Remaking Participation: Science, Environment and Emergent Publics was published by Routledge in 2016. The book grew out of an ESRC-funded seminar series on ‘Critical Public Engagement’ directed by Jason in 2009-2011. The series involved over 250 social scientists, scientists, participation practitioners and policy-makers, from the UK and internationally. The approaches developed in the book are being applied to issues of climate change, energy transitions, emerging technologies and public engagement with science, in the UK and other countries around the world.

Jason and Matthew dedicated the award to David Gasi who, along with colleagues at the design agency Solid Block, designed the book’s striking front cover. During the awards ceremony Jason stated: “David sadly passed away earlier this year. He was a hugely talented artist, designer and friend who will be sorely missed. We would like to dedicate this Amsterdamska award to David’s memory.”

Research in this theme explores the underlying causes, governance challenges and potential policy solutions in the transition to sustainability, particularly with reference to the role of science. ‘Governing’ refers to activities that seek to guide, steer, control or otherwise manage human societies. ‘Governance’ describes the patterns that emerge from these governing activities: administrative organisations such as government ministries, formal policies and programmes, and specific instruments such as emissions trading, and also more informal activities of non-state actors operating alongside, and sometimes wholly independent of, governments. While basic science surrounding societal problems may be rarely contested amongst scientists, debates about how to govern the responses have become more intense. The main barriers to collective action are often political and governance-related, not scientific or technological. Research in this theme aims to better understand this complexity and explore potential solutions.

The rise of public participation in science and the environment in all its forms – ranging from institutionalised invited spaces of engagement to those that are uninvited and citizen-led – has the potential to empower citizens, enhance social justice and the quality of decisions, but also to close down, disempower and exclude. Research under this theme involves the study of democratic experiments and innovations in participatory governance. These are reconfiguring relationships between science, policy and society and coproducing knowledges, appraisals and commitments in response to sustainability challenges.