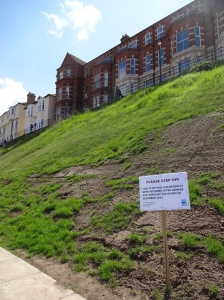 From the 5th to the 7th of December 2013 the east coast of England was affected by “the biggest UK storm surge for 60 years”. The storm surge along parts of the coast reached higher levels than the devastating floods of 1953. Loss of life due to flooding was avoided; but there was still extensive change to the coastline, damage to seawalls, and flooding of areas designated as “hold the line”. This event offers a unique opportunity to investigate the environmental impacts and social and policy responses to a severe episodic event. A team of natural and social scientists within the School of Environmental Sciences at UEA, including Dr Irene Lorezoni from the 3S group, has received funding from NERC to determine the environmental impacts of this storm surge event and understand the social responses.  The study area is the North Norfolk Coast (NNC), between Brancaster and Salthouse, constituted by a mosaic of urban, natural, semi-natural habitats and farmland, used extensively for recreation. The social sciences component will engage with the public and stakeholders to explore and understand the social and policy responses to the flooding and disruption caused to natural habitats and areas of conservation and recreation. It will focus on understanding how, from the perspective of its inhabitants and visitors, the changes to the landscapes resulting from the storm surge are being considered and received and how these have been managed in the immediate and short-term aftermath of the event by national agencies and local decision-makers. It will also explore how the event may create opportunities (or barriers) for changing thinking and policy around responses to storm events and longer term adaptation and transformation.

Research in this theme explores the underlying causes, governance challenges and potential policy solutions in the transition to sustainability, particularly with reference to the role of science. ‘Governing’ refers to activities that seek to guide, steer, control or otherwise manage human societies. ‘Governance’ describes the patterns that emerge from these governing activities: administrative organisations such as government ministries, formal policies and programmes, and specific instruments such as emissions trading, and also more informal activities of non-state actors operating alongside, and sometimes wholly independent of, governments. While basic science surrounding societal problems may be rarely contested amongst scientists, debates about how to govern the responses have become more intense. The main barriers to collective action are often political and governance-related, not scientific or technological. Research in this theme aims to better understand this complexity and explore potential solutions.

3S works collaboratively with a variety of stakeholders, affected communities, scientists and risk management authorities and across all levels of government, in a reflexive and interdisciplinary way that recognises multiple knowledges. We address challenges presented by human-made, technological and natural hazards and their associated risks across areas including climate change, radioactive waste and a range of environmental hazards such as flooding and volcanic.

Our research draws on and contributes to different theoretical and methodological approaches including actor network theory, governance and behaviour change, multi-hazard perspectives, citizen science and participation.

Understandings of climate science, climate framings, and societal engagement with climate constitute the focus of 3S research in this area. We work constructively with stakeholders, policy makers, publics and other actors to open up areas for deeper understanding of environmental change.

This includes how climate change relates to people’s daily lives, and how policy making may be better understood as exchanges and evolution of discourses over time. Through mixed methods and theoretical approaches, 3S explores the responses to extreme events, innovative policy developments, opened spaces for rethinking of mitigation options, and perceptions of climate in relation to the marine environment.